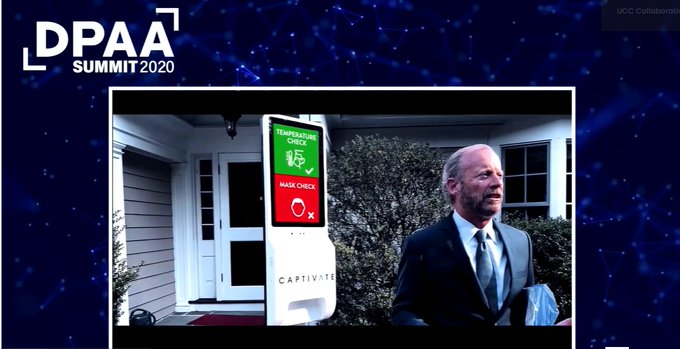 Every year, the DPAA, or Digital Place Based Advertising Association, hosts an event called the Video Everywhere Summit. The event is traditionally held in New York City, positioned as “the largest one-day omnichannel marketing event of the year.” It usually, impressively, includes big household names — last year, it was Adidas, Deloitte, IBM, HP and The New Yorker, to name a few.

So what do you do when a global pandemic prevents you from having your annual summit in person? You have it anyway — but online, through a digital event platform designed for an engaging audience experience, with both speaker and viewer dialogue rich in discussion on what’s next for DOOH (digital-out-of-home) advertising. That’s exactly what the DPAA managed to pull off this year as the organization — like so many others — sought to find a way to bring together its global audience despite the 2020 circumstances.

If you don’t know, the DPAA is the global trade marketing association that connects out-of-home media with the advertising community while also “moving OOH to digital.” That last part of the tagline is important for our readers at rAVe — and it’s likely you’ve already started engaging in some of the key components of DPAA’s educational pillars. These topics include DOOH advertising, data/analytics/tracking, programmatic ad buying and, of course, digital signage. We all know the latter, as we’ve seen recently, is certainly not to be ignored.

Below, you’ll find our recap of a few sessions from the DPAA Video Everywhere Summit, day one, held this year through rAVe’s LAVNCH platform!

After an introductory event welcome (and a fun intro video) from DPAA President and CEO Barry Frey, the day’s sessions commenced. Raja Rajamannar — CMO and president, healthcare, at Mastercard (and owner of two dogs, we learned) — kicked things off with a lively discussion on how to make meaningful connections with today’s consumer.

Cutting through in this marketplace, with such a plethora of media choices out there, how has Mastercard approached the challenge? Frey asked.

“One of the key things that we realized early on … you have to perform the role of being a consumer,” Rajamannar said.

Advertising is an annoyance, a friction, so putting on a marketer’s hat brings forward the realization that most people dislike ads (even paying money to download ad-blockers to avoid them). What do we do about it? Rajamannar explained Mastercard’s strategies in story-making (notably different from storytelling), one of which is curating “priceless” experiences for consumers that hopefully create a good association with the brand.

“What we are trying to do is be more thoughtful and careful about where we show up,” Rajamannar continued.

How do you cut through the clutter when consumers are bombarded with thousands of ads? Another Mastercard strategy is focusing on reaching consumers in the correct context, prioritizing “brand safety” and respecting rules like whitelisting and blacklisting. Digital experiences — while not nearly as impactful as meeting in person, Rajamannar said — continue to be effective. For travel and lifestyle verticals in particular, Mastercard is finding much success in DOOH strategies. For instance, 54 million point-of-sale interactions currently exist in which consumers can hear the Mastercard “sonic identity” sound at checkout — an example of a “multi-sensory experience” we can create with consumers.

What will be key in the evolution of these consumer experiences, Rajamannar argued? Technology and data.

Earlier in Tuesday’s event, François de Gaspé Beaubien, chairman and chief coaching officer of Zoom Media, said, “By the end of 2021, programmatic DOOH will represent a third of planned DOOH buys for 2022.”

So it’s clear that programmatic DOOH is a topic of much discussion, even one that organizations today are campaigning around. The DPAA’s latest campaign (the one I just linked to a moment ago) spreads the message to advertising decision-makers that, per the campaign, “DOOH audiences are steadily coming back and that programmatic DOOH is agile and nimble, and thus ideal for the greater-than-ever need to change messages in real time.” This refers to, in one perspective, DOOH’s ability to reach a very specific audience at a very specific point in time — with the right message, of course. (Advertising 101, right?)

So why (and how) is programmatic DOOH exploding, even during a pandemic?

Kuperus said that programmatic, unlike other advertising strategies, allows for adaptation and flexibility, as brands want and need to communicate quickly, often changing their messaging day to day.

Ishac echoed this: “The investment that the industry has made in technology, programmatic and attributions has really started to pay off.” Programmatic allows us to measure ourselves, and combined with DOOH screens, brands are starting to invest in DOOH as part of their core multichannel strategies, he continued.

Advertisers and publishers are seeking flexible solutions in a pandemic world, Jinnai said. For instance, the DOOH market in Japan (the third-largest OOH market in the world, according to Jinnai) is unique, but it has not worked out the full OOH-buying process. Jinnai believes programmatic is an effective medium for working through some of these challenges, global to local and local to global.

Clients and advertisers are better serviced through innovations in programmatic OOH, Kuperus added. The evolution on the data-ecosystem side is key to this. With smarter insights, faster time-to-market and better storytelling across screens in both mobile and OOH, programmatic has been able to answer client needs better. Kuperus added that it’s important to look at programmatic not in isolation but within the context of OOH and digital too.

A quick look at the three As of DOOH, as explained by Ishac:

We have now proven the value of the three As and programmatic to brands, Ishac argued, so we will only see accelerated interest and growth in programmatic from here. Wrapping up, Soupliotis reminded us, “Mythology tells us that where you stumble, there your treasure is.” (A quote by scholar, teacher and storyteller Joseph Campbell.)

A Session with Broadsign & Verizon

“Broadsign Spotlight On” was a Video Everywhere Summit session I was looking forward to, and many rAVe readers might recognize the headline company for it, Broadsign. Leading the session was Greg MacDonald — VP, marketplace partnerships, at Verizon Media — and Adam Green — SVP and GM, programmatic platforms, at Broadsign.

The quick but effective conversation winded from case-study examples to a discussion on how OOH fits into Verizon Media’s strategy.

“In the immediate term, it’s about the first-mover advantage,” MacDonald said.

Clients are looking to maximize the ROI on their spend, and OOH provides an upside for everybody — the consumer, the advertiser, the media owners. The pandemic has put a damper on the OOH space this year, but even so, advertisers are still out in retail locations, and this is a great time to test and learn, MacDonald continued.

“We’re growing the opportunity for literally everyone on the value chain,” Green reiterated.

What I found great about Tuesday’s event — not just from the advertising angle but from the AV angle too — was DPAA’s ability to pull together a mix of leaders: CMOs, brands and speakers from various perspectives, like the client side (e.g., Mastercard), the agency side (e.g., Kinetic), the technology side (e.g., Intel; Broadsign), the entertainment side (e.g., WWE) and even the political side (Frank Luntz).

Good news: We’ll be back at you tomorrow with another recap on day two of the Video Everywhere Summit. Cherry on top: If you’re just catching wind of this event, you can still register for day three — but registration will close soon, so we advise you to hurry up there. Lastly, if you missed the DPAA event live but registered for it anyway, you can log in to view the archives starting Monday, Oct. 19.

Now, as Frank Luntz would say, ELMO. (Enough, let’s move on.) Until next time, everyone.