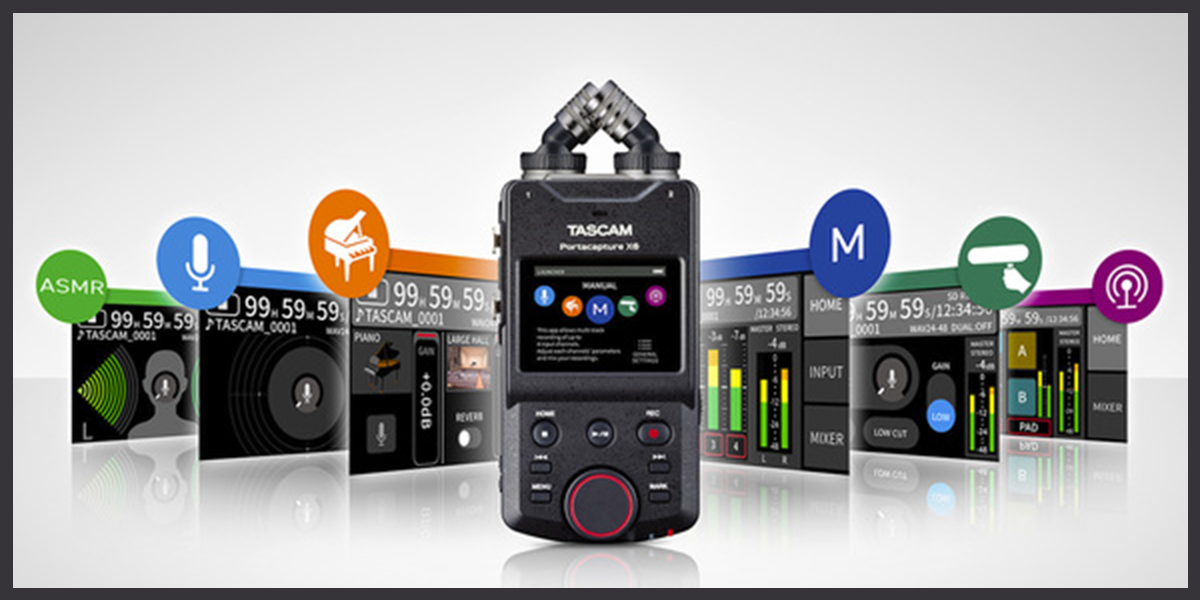 Portacapture X6 provides two built-in microphones that can be set in both AB and XY configuration for spontaneous recordings in the field. It has also two XLR inputs for both mic and line-level signals (up to +24 dBu) with switchable phantom power (24 V / 48 V). Aux input, Line output and Camera in/out connections are also available.

For postproduction tasks, the new Tascam recorder includes low-cut filter and noise gate for reducing background noise and unwanted frequencies, limiter and compressor for signal level management. There’s also a four-band equaliser which offers presets for several common scenarios in addition to full manual setup with an intuitive user interface. To eliminate wind noise and plosives even more, Tascam is announcing the new WS-86 windscreen which is a custom form-fit design made for Portacapture X6, Portacapture X8, DR-40X and other portable audio recorders from Tascam.

An included driverless USB audio interface makes it possible to use the Portacapture X6 as a compact mixer with built-in microphones for live streaming via OBS (Open Broadcaster Software) or similar platforms. It also offers direct recording of narration and dialogue directly to DAW and editing software. The system can stream the overall mix via the USB Type-C connector.

See related  What Is the rAVe Squad Bringing to ISE 2023? Your Ultimate Packing List!

People seeking remote control functionality can add the optional AK-BT1 Bluetooth adapter and install the Tascam Portacapture Control app on their phone or tablet. The app is available for both iOS and Android and can be downloaded free of charge via the Apple Store or Google Play. On the final ISE 2023 episode of rAVe [TV], I interview AVIXA’s Dave Labuskes, ISE’s Mike Blackman and Equipson’s Juan José Vila. After getting all their show-floor thoughts, Gary takes you on a walk around the final two halls of the show, Halls 6 and 7.  ﻿﻿﻿﻿﻿