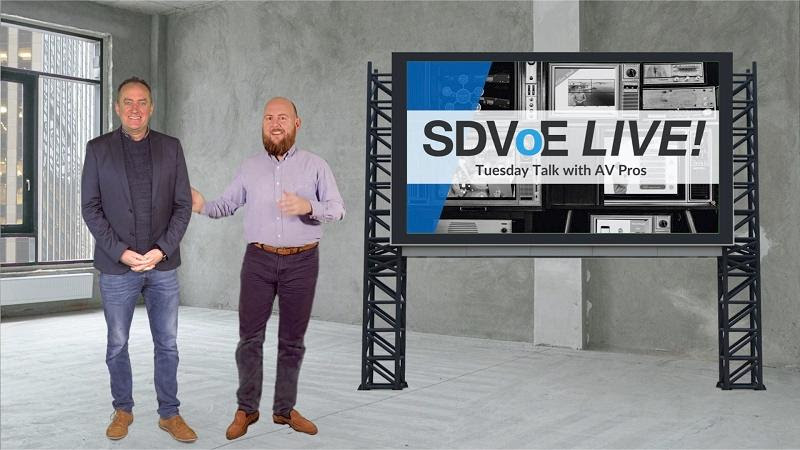 Instead of sulking over it, the association responded with an idea. No live events in 2020 be darned! (Using our PG language here…)

To keep it fresh and unique, like SDVoE’s idea for an AV-education-focused TV show, we decided to write this article like a proper TV show review: Because if we’re going to review a TV show, we need to write like reviewers of a TV show.

Dec. 1 Review: “A New Architecture for Network Convergence” (Plus An Announcement from SDVoE)

Episode one of SDVoE LIVE! on Dec. 1 gave us — on Giving Tuesday, mind you — a fresh look at converged AV/IT networks. Where do we stand on the topic today? Here’s our review.

Episode Review: When a new TV show is created by AV people, it makes sense that the budget would be blown on a great display and mount rather than a nice virtual set — note the lack of carpet. Jokes aside, because we’re pretty sure the minimal set was part of the plan and you’ll see SDVoE’s beautiful set additions in our episode two recap below, the debut episode of SDVoE LIVE! surprised and delighted.

After some fun introductions from show stars Justin Kennington and Matt Dodd, we heard a special announcement from SDVoE, Kennington teeing it up by explaining how SDVoE intends to be, sort of, like the Android for ProAV. The announcement: The SDVoE Alliance will be offering a brand-new SDVoE AVI Developer program starting next year. The goal is to open the program to anyone who wants access by summer 2021. The purpose? To provide access to software for developing documentation and building applications on the SDVoE platform. The “why?” “It’s time to start delivering on our promise of ‘software-defined,’” said Kennington. To participate in the alpha program for SDVoE’s AVI Developer program, just drop an email to info@sdvoe.org.

Matt Dodd of SDVoE explains the principles of AV over IP vs. AV over IT

Next, the show’s education portion commenced featuring Matt Dodd. Dodd schooled us on why AV can’t just turn up and put its AV designs on the IT network. Then, we learned about some key differences between AV-over-IP, AV-over-IT, and even IT-over-AV. “AV-over-IP is often confused with AV-over-IT,” Dodd added.

But designing an AV network, one that takes care of IT, is so important. So how do we do it?

It’s a loaded question, but one that was distinctly discussed on “A New Architecture for Network Convergence.” One of the best parts of the episode — and not just because it’s where we get some of the best Justin-Matt banter — was the aftershow. Sort of like “the meeting after the meeting,” it was the show’s hero takeaway moment, with key summaries alongside an audience Q&A, bringing us back full circle and revisiting our main questions on AV/IT convergence. To watch the aftershow, only available on the SDVoE Academy episodes (as opposed to the YouTube ones we linked earlier), sign in and create a free account if you don’t already have one.

After its December debut, SDVoE LIVE! was back for a second episode in “What Is a Network, Anyway?” The quick version: Google “network” and the definition is anything but simple. This episode sought to give us a clearer definition of a data network using the OSI model as reference. Why? Because IT needs to know about ways we (AV) stream/distribute on the network. And AV needs to better understand the complications faced by IT. We’re all working for the same team here, okay? Here’s our review.

Justin Kennington and Matt Dodd on the set of SDVoE LIVE!

Episode Review: I mean, the first thing I noticed in this next episode is that SDVoE added the inflatable chair per my suggestion two weeks ago. Which leads me to my inevitable glowing review. Spruced-up set aside, this episode taught us a lot.

Matt Dodd explains, “What is a network?”

Regarding IT’s knowledge on the world of AV, Dodd pointed out, “There’s still a bit of a gap — let’s put it that way.”

So, what is a network? Dodd asked, challenging us in his recap segment. Using the OSI model, networks are created at layer 2, also called “broadcast domains.” Networks are connected together at layer 3, these connecting networks called “subnets.”

Got it? Good. Don’t got it? Rewatch episode two via the link I’ll drop in the next sentence. If you didn’t already watch the YouTube episode we linked earlier, we definitely recommend viewing the show via the SDVoE Academy, which includes the exclusive aftershow and Q&A portion — an extra perk for SDVoE Academy members. (And yes, it’s free to create an account!)

SDVoE LIVE! Is ProAV’s only edutainment (education + entertainment) program and it takes place every other Tuesday at 1 p.m. EST. The next episode, “Leveraging Fiber Optics for Video Distribution,” will come on Dec. 29. Here’s a look at the upcoming episodes:

We’ll see you for the next one!

Catch the next SDVoE LIVE! episode by visiting SDVoE.org/Live. By clicking on the link, you can sign up for email reminders or download the event to your calendar. Don’t have an SDVoE Academy account yet? Use this link to make a free one before the next show: https://bit.ly/3oO1kWu.