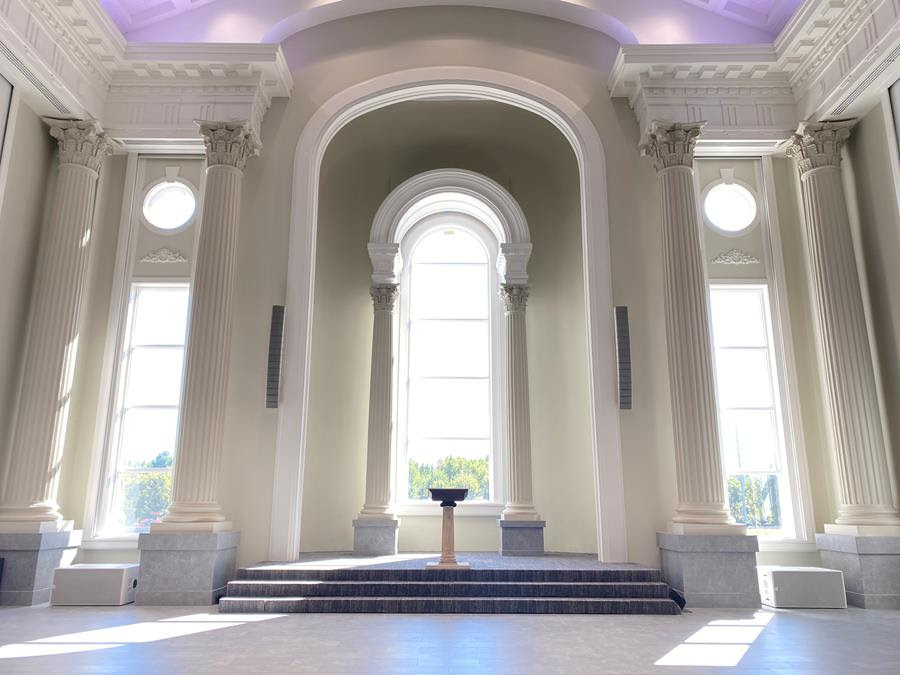 High Wycombe, UK – November 2022. There is a school of thought that micro line arrays are only good for vocal applications. This misconception comes from the type of projects where such a sound reinforcement system usually excels. However, these small format cabinets can also deliver much more musicality than people expect.

When consultants are recommending micro line arrays, it is usually due to a combination of two common factors. First, the application requires a sound system that will not take away from the aesthetics of a space. And second, the venue requires tight control over the audio to ensure intelligibility.

This combination means that houses of worship are often the most common application for micro line array systems like Martin Audio’s O-Line. And the reaction of users in that setting is overwhelmingly positive. “We are extremely satisfied with the performance of O-Line,” said Zachary Ward, Director of Communications, First Pentecostal Church in North Little Rock, Arkansas. “With such a unique room, including 42ft-high ceilings and several stained-glass windows reaching more than 28ft tall, O-Line provides even coverage and clarity while accomplishing our main goal, preserving the overall aesthetic of the room.”

However, once the system is put into use, the full capabilities of O-Line become clear. “It’s a very transparent PA — it’s not lumpy in the bottom end,” noted Mozaix Director Paul Tucker, discussing St. Paul’s Lutheran Church in Melbourne. “We had a consecration service featuring a fantastic viola player, and the sound of that instrument was beautiful — really stunning.”

“We wanted to let the choir master, minister and organist hear the quality over the area they wanted to cover, and they were all blown away,” agreed Roger McMullan, Rea Sound Project Manager, reflecting on an upgrade project at Belfast’s St Mark’s Church. “In fact, they can now hire it out so that bands can play through O-Line as a full range system without the need for additional subwoofers.”

Surprise at the level of musicality possible with a micro line array is a common theme. Most users are expecting the even coverage and improved intelligibility, but expect to sacrifice musical performance as a result. The response when venues find out that they don’t need to make musical compromises is always positive.

“They were ecstatic about the system and blown away with the intelligibility and musicality of the O-Line system,” reveals John Pierce, Director of Sales for Audio-Video Group, recalling a project at Washington DC’s historic Capitol Hill Baptist Church. “And even without subs, they were happy with the range those boxes provide—they go pretty low and sound good. I love the O-Line. I’ve done several systems in more traditional churches and they’re fantastic for speech and music as well.”

The result of these reactions has seen an increasing number of people starting to specify micro line arrays for a wide range of projects, from planetariums to conference venues. “The client mentioned in our first meeting that he wanted something that would visually flow with the interior and provide full coverage allowing small bands to play through the speakers for special events,” noted John Wojciechowski, HBS’ Engineering Services Manager AV when discussing a sophisticated conference space at Gentian Financial Inc. “That is when the O-Line came to mind – small and subtle footprint, amazing speech capability, consistent and discreet music coverage.”

As the full capabilities of micro line arrays are beginning to be seen in more applications, there is sure to be an increase in demand for these small, yet powerful systems. “O-Line has proven time and again over the years that it is a flexible system that can deliver outstanding results in a variety of spaces,” said Dom Harter, Managing Director at Martin Audio. “Adding in a subwoofer will often make the system even more musical, and with O-Line and compatible subs currently in stock, ready to ship, there is a real opportunity for people who are struggling to get hold of other solutions to give micro line arrays a try. I’m certain that they will be impressed with the results.”