Although InfoComm 2022 was over five months ago, I wanted to share some of the unique things I saw and events I experienced — as InfoComm 2023 in Orlando will be different and many are starting to prepare now.

First thing’s first, I decided to stay at the Vdara Hotel during the week of InfoComm since I had been there several times since it opened in 2009. Check out this left and right view! 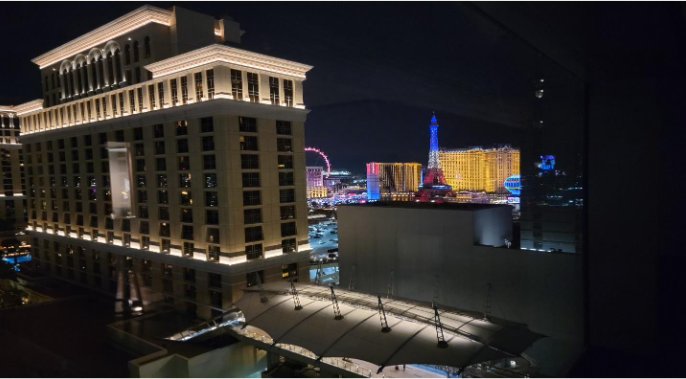 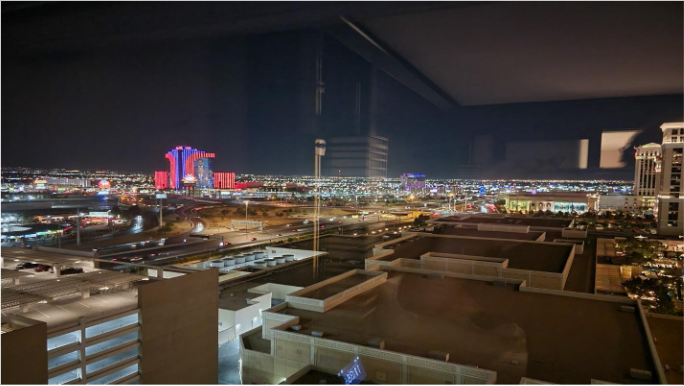 Although there were many seminars and conferences prior to and during InfoComm, I was only able to attend two of them. The first was: 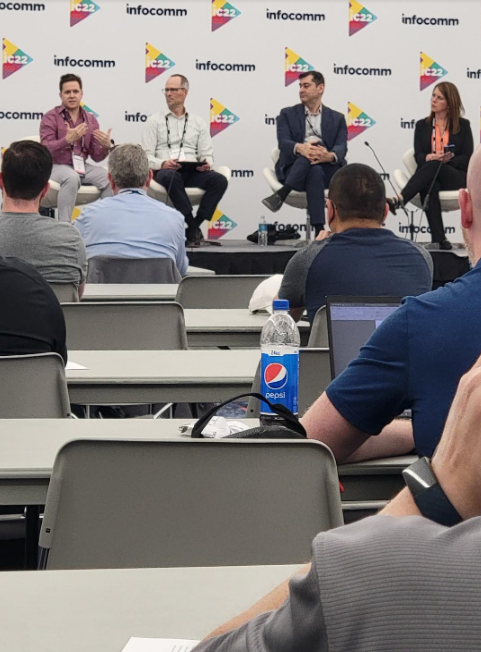 This is an important topic in the digital signage field. As more companies become involved in aural/visual CMS digital signage projects, the advancement of technology to enable automation within these applications will become more critical to their success. Part of any company’s challenges when you have an individual or team of people creating content and utilizing a management system is to maintain continuity. This becomes difficult as people change responsibilities within their organization, take time off or they leave and re-training other people to take over is very difficult as they may not have been initially hired to do so, nor want to do so.

The second conference I attended during InfoComm was:

Topic: “Creating a PMO for Your Organization” 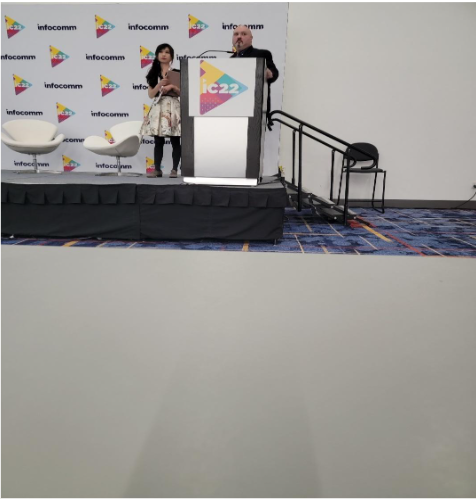 “Creating a PMO for Your Organization” panel at InfoComm 2022

As for my thoughts on this panel, I have worked at many technology companies over the years, and I can tell you from experience that those companies that follow a Project Management Office (PMO) process will always do better than those who don’t, unless they have a lot of luck on their side (and luck will eventually run out).

First of all, on the way into the show floor, I saw someone almost walk into this robot (carrying InfoComm brochures) and then the robot (aka CLOi ServeBot) verbally warned that person to watch out, so he did not walk into it:

Here’s what I saw on the actual show floor: My team shared our digital signage CMS with some widgets and feeds with Mersive in its exhibit booth, and they had a lot of people throughout the entire show standing in front of the displays (yeah, it was actually 100 degrees outside that day): 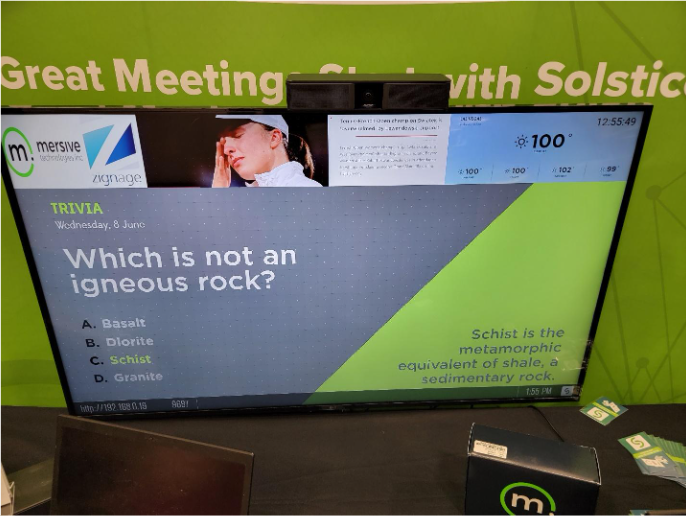 I walked from the Mersive booth with a few people to meet with our colleagues, Sheri Hurley and her team at the Wachter booth which highlighted Proto Hologram’s Epic devices and their brand new (approximately 18” high) Mini (M) holographic technology which Matt Tyler from Wachter described on camera:

I enjoyed seeing the reaction from people who had been in the telepresence kit (a mini stage area for recording video and audio) and were beamed to the larger 7’ Epic Device (on the video, behind the Mini), then walked over to see themselves on that device.

As I walked around the floor, I noticed that Leon Speakers had once again brought in an Airstream, but I think this time the company added a lot of agriculture: 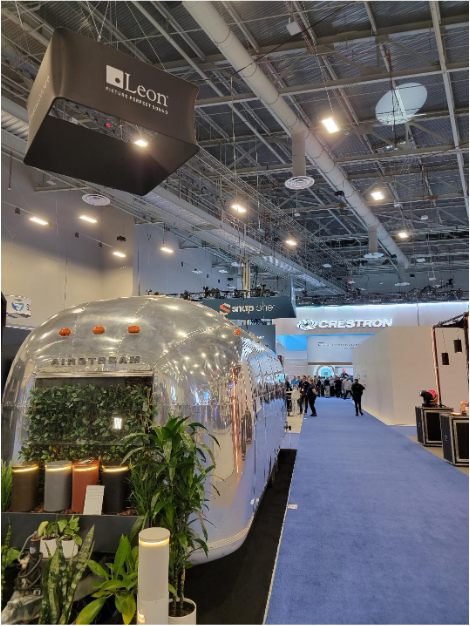 I visited other booths during the week, and I also saw some of my colleagues at LG. There was a long walk between the North and West Halls, but I was able to save time by experiencing the Tesla Tunnel. I would say that if every quick-service restaurant (QSR) or retail store was set up as efficiently as this operation, every store would make more money. There was at least one person who met you when you came down the escalator to confirm which convention hall you wanted to go to. They would then point you to a slot, a Tesla car with driver pulls in, you get into the car and then the operator would drive out of the slot and into the appropriate tunnel:

We finally got to try out the underground @Tesla transportation from the North Hall to the West Hall! #InfoComm22 #AVtweeps pic.twitter.com/FYkWQ4HFH3

The ride was between two to three minutes, and after each ride, I thought about getting a Tesla as my next car (although I must get a Subaru first — do you know to what I am referring?).

One of my meetings was with the Primeview Team in its North Hall Meeting Room, which highlighted some of its unique display technology, including a hotel lobby with a space inside the video wall for the elevator (I took a picture of the video on their video wall): 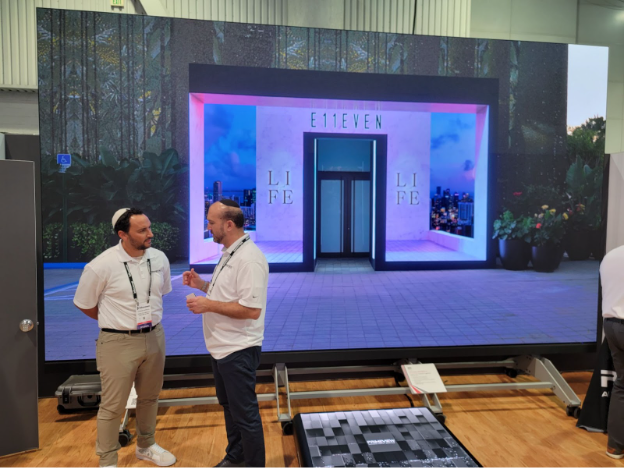 My team also worked closely with SiliconCore and Render Impact to provide a digital signage experience on its L-Shaped Video Wall. In fact, many people were hesitant to stand on the video wall, but was specifically designed for that feature:

Since I had given away some free tickets during our Tuesday afternoon Happy Hour at the Illuminarium Lounge Area to the Illuminarium After Dark Show, I met some of my associates there. We met our bartender right outside of the show who had worked during my happy hour event at the lounge on Tuesday — he even remembered what I had ordered (I have a lot of respect for that): 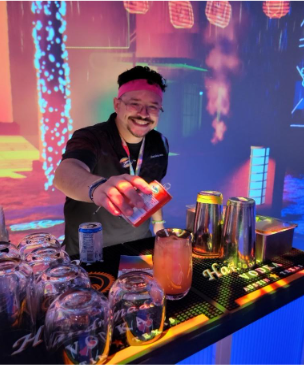 The Illuminarium – Lunar Landing Scene, closest experience to actually being on the moon: 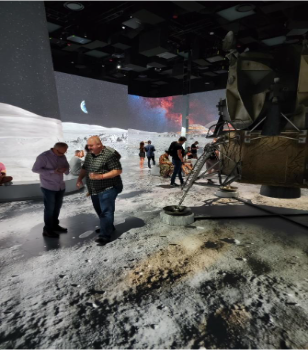 Illuminarium — Bar in Space (makes perfect sense to me): 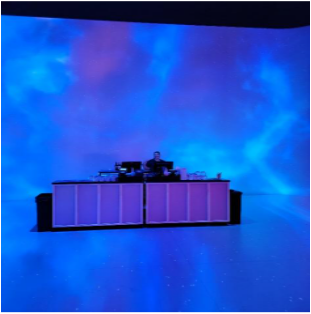 I also met several colleagues from various companies at Top Golf one night, including Logitech, Planar and an integrator from Canada, who shared the booth with me. Clearly, my form was not great, although I consistently hit the ball 145 yards to the right (per the equipment sensors); so I need to take a few lessons as I had not played in a few years: 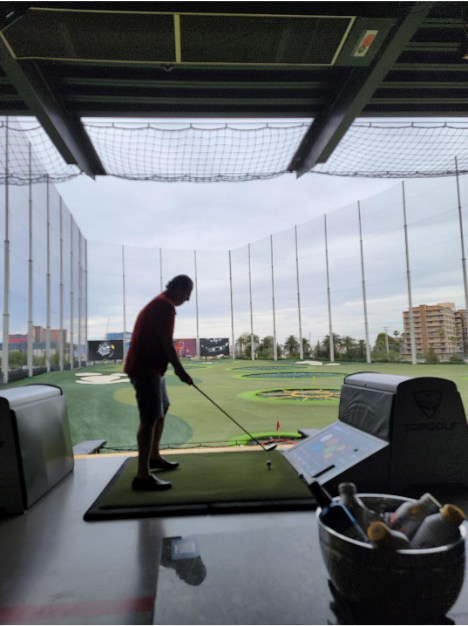 There were many people I saw at the show whom I had not seen in a long time or had never met before. I look forward to the next InfoComm Show, June 2023 in Orlando, Florida, as my best interest is to continue to attend InfoComm while my focus continues to be part of the AV Industry. Although it is important to stay on top of the new technology that is shown every year, more importantly, staying in touch and meeting with colleagues is just as critical to my success. Why Pay Equity Matters in ProAV

Pay equity is the concept of providing equal pay to employees with similar job functions, regardless of their gender, race, ethnicity or other status. Seems like a no-brainer, but recent AVIXA research has indicated there is a large wage gap in ProAV — one in terms of race and the other in terms of sex. […]