A view of the satellite campus for Church Unlimited in Corpus Christi, Texas. The church is using an ROE Visual BP3 LED video wall. The goal was to originally to eliminate shadows and front lighting issues using projection. With there being no room behind the wall to do projection, LED achieved the goals for this application. Photo courtesy of Josh Holowicki.

As 2020 has turned into 2021, many recently arisen challenges are continuing to confront churches.

Among the challenges thrust to the forefront are those associated with recognizing the increasing value of broadcasting and streaming worship services. Even with churches having been largely open in recent months, most have been so on a limited capacity basis.

For some churches, the video solutions typically under consideration range between investing in an LED video wall or projection.

Not too long ago, LED walls were often deemed too cost prohibitive for many houses of worship. When making such an “either-or” decision then, LED walls often lost out, once cost was factored into the equation.

These days, though, much has changed. “For the most part, LED has taken shape,” said Josh Holowicki, founder of E2i Design in Brighton, Michigan. “It now serves as a strong contender from a cost perspective. A few years ago, unless you were willing to spend big money, projection was the way to go.”

Flexibility: A Major Factor for Churches

A shift has come about as churches seek to benefit from “a flexibility standpoint for an onstage display,” Holowicki noted. Flexibility is key when working with customized imagery, videos and worship lyrics or scripture, as houses of worship look to increase their visual tool investments.

“With social distancing and people being online as church attendees, it has required a significant increase in the media quality,” said Stefan Svard, founder and president of Audio Video Electronics, based in Brooklyn Park, Minnesota. Upgrades for many churches have included investing in camera systems. Upon taking that step, churches have often “looked to LED walls as a backdrop to the pastor and worship team.”

As LED walls have made significant strides in recent years, Holowicki argued the room for huge technological improvement has narrowed.

“When LED panels first came out, they were low-resolution, like 20-millimeter (pixel pitch), and at a high cost,” said Holowicki. “Over time, the pixel pitch got tighter and tighter. In my opinion, we’ve largely gotten to the bottom, as tight (a pixel pitch) as they can.”

Amid the improvement in technology, Holowicki noted the greater need for flexibility points to LED walls as the better option.

“With COVID, people have flipped from a live experience, to a capture-heavy one. As a result, (the church is) configuring the stage regularly,” said Holowicki. “They are looking to have a more dynamic experience, versus if they are just live.”

Being Ready For the Future

As a return to some degree of “normal” is envisioned down the line, Holowicki added, “Once they are engaging in live experiences again, flexibility is important.”

Flexibility also makes sense when thinking long-term. Or as Holowicki described, “There’s only so long, when continually producing content, before one looks to do something different.”

The demands to improve a church’s streaming or broadcasting experience go beyond providing content to a congregation watching from home, noted Svard.

“What quality standard are people expecting?” said Svard. “At the Church of the Highlands, (prior to COVID) they had a tremendous component to their ministry, and have a broadcast-quality LED wall.” Church of the Highlands in Birmingham, Alabama is shown with its ROE Visual BO3 video wall, with Brompton processing. Photo courtesy of Josh Holowicki.

Recognizing that a number of churches entered the pandemic without streaming, Svard explained, “We live in a society that has become accustomed to a very high production level of video and audio. It’s not a secret for churches which have that (are benefiting).”

In recent months, the church has seen “their broadcast attendance far eclipse their in-person attendance,” said Svard. “Many people were searching (for worship services online), looking to connect with a church, while staying at home.”

Holowicki also referenced the church based in Birmingham, Alabama, discussing how it “wanted flexibility with unlimited possibility.” By deciding on an LED wall comprised of ROE Visual Black Onyx LED panels, “the system that we put together, it offers that for them.”

Another aspect of “flexibility,” explained Holowicki, is working with a church administration, for it to “tell us your ultimate vision. Then put a budget to that, and work backward.” Such an approach can work for an LED wall, he noted, because it “is something you can build and scale. If your vision is for 300 panels, but your budget can only do 80, you can start with 80. And build from there.”

How projection can offer a level of flexibility for a house of worship, explained Svard, would be “where you need a screen to disappear. Where they want it to roll up and go away.”

And for churches that simply don’t have the budget to invest in an LED wall, Svard suggested a church “then buy a 3-chip laser projector. One that has the appropriate brightness for your screen size.” Projection was often the choice over an LED wall not too long ago, for reasons beyond cost. Concerns over rigging and load restrictions within some facilities arose as a major factor. Thanks to recently expanding rigging solutions, LED walls now “have engineered solutions in instances where the building cannot support additional weight,” said Svard. “It can be wall mounted, ground stacked, or have a custom truss that bolts to the concrete floor. Or have the LED wall float behind the stage, with the legs supporting the LED wall from behind.”

Looking Down the Road and Associated Equipment

Even with an expected higher cost factor for an LED wall, upon accounting for either solution’s expected life span, a longer time in attaining an extensive value from an LED wall is most likely.

“With a broadcast LED wall, you will have a 10-year-plus life span,” noted Svard. “A typical projector life span runs five to seven years, but a projector’s image quality will significantly degrade as they age.”

Beyond just deciding on an LED wall or projection for the space, the associated gear should play a large part in the final decision.

“Other things to consider include what are the video capturing devices? Or where are they delivering content to?,” asked Holowicki. “It’s a bigger picture than, ‘Do I have a video wall?’ They should all have a value when making a decision on either an LED wall or projection solution.” Vioso will be back at Integrated Systems Europe in Barcelona (Jan. 31 – Feb. 3, 2023) to showcase its projection software Vioso 6, a new workstation called “Anystation Micro”, this time joining forces with a British projection manufacturer Digital Projection on stand #3K800. The German projection specialist, which provides a range of media servers and […] As one of the largest and most comprehensive universities in New York state, the University at Buffalo is a premier educational institution. The flagship university of the SUNY system, this research-intensive university hosts a wide variety of sought-after programs for its 32,000 students, including Medicine, Pharmacy, and Law. With an esteemed reputation in both academic […] 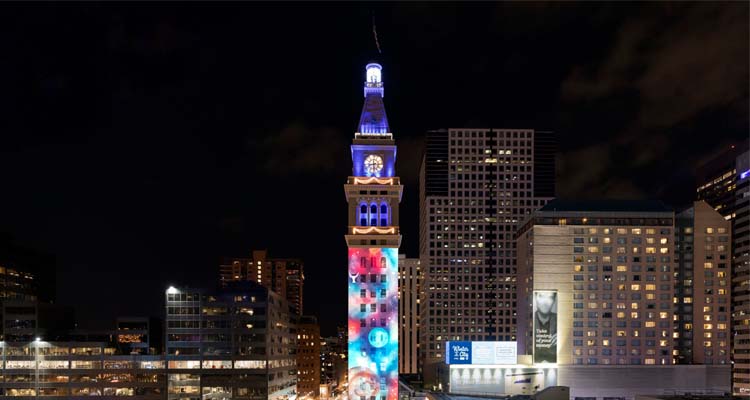 Denver, Colorado, has a rich history of infrastructure and cultural development. What started as a small gold-rush town now boasts the 10th largest downtown area in America. But even with its status as a major metropolis, the Mile High City has always tried to maintain a healthy balance of population, urban beauty and ecological impact. […]