ISE Opening Keynote: Learning How to “Embed Innovation” in the Workplace at ISE 2020 Since its first show in 2004, ISE has fostered a culture of innovation in the products its exhibitors bring to the show floor. At ISE 2020, the opening keynote speaker, Duncan Wardle, had a lot to say about how we (in B2B, B2C or what have you) can promote this culture in our own places of work.

Wardle is a keynote speaker who was formerly the head of innovation and creativity at Disney. If you don’t know what that particular position means, don’t worry, you’re not alone. But in a nutshell, his role meant helping the company create new ways to solidify its brand and continue to innovate and be the Disney we all know and love.

He began the keynote in a way that not many were familiar with — making everyone come to the front of the room and perform a brief exercise. Attendees were instructed to form a group of three. He assigned each person a niche job — designer of parachutes for elephants, designer of invisible clothing, or sex therapist for honey bees.

“Each of you is a guru at your job, and it’s the job of the other two to interview you while you come up with expert answers to their questions,” he said. The point of this wacky exercise? Proving that all of us — from AV integrators to press to end users — could be creative if we really tried.

Wardle moved on to speak about what his former role at Disney looked like — and how his career came to be literally looking for new ideas and pitching them to the right people. He said Walt Disney was the original man who looked to break the rules at work, noting that when movie theaters weren’t keen on the idea of bringing in smoke machines and other accessories for viewings of Fantasia, it launched Disney into the first blueprint of ideas leading to Disneyland.

Wardle also shared his thoughts about what would happen if businesses don’t work harder to push innovation and new ideas in all industries.

“If you don’t have a purpose, you’ll be gone by 2035,” he said. He added that between AI coming for all of our jobs and a new generation of thinkers, (Gen Z,) businesses were going to be forced into thinking outside of the box.

One of the ways we can do this is by investing in diversity but not in the way we think.

He explained that we so often commit to the idea of diversity but without going the extra mile to put all the people who are different from one another into a room to bounce ideas of one another.

One of his final points was about putting ourselves in the shoes of end users, something that anyone from any industry can take into consideration.

“How many companies offer to go spend an entire day in the living room of their customers?”

He has a point. How can we at any company tell customers or end users what they want — when we don’t spend time asking them what it is they want or why they want it.

By spending a day with your end users, you will find that one insight your competitors can’t. You all have access to the same data. Stop using data. @DuncanJWardle #ISE2020 pic.twitter.com/4LI45M61Na

His final point: When we ask questions to these end users — ask them why. And don’t stop asking them until we’ve asked, “Why?” about five times. That’s when we’ll get the critical answer, and that’s when we’ll start getting somewhere.

Find out more about Duncan Wardle here, and get more information about other keynotes at ISE here. At ISE 2020 in Amsterdam, the CAST Group of companies unveiled the latest product in their line of BlackTrax Real-Time Tracking solutions. Mounted directly onto a camera, BlackTrax will allow users to place BTSensors in vantage points and areas that best suit the specific environment of any production. HELIOS is a PoE device that gen-locks […] 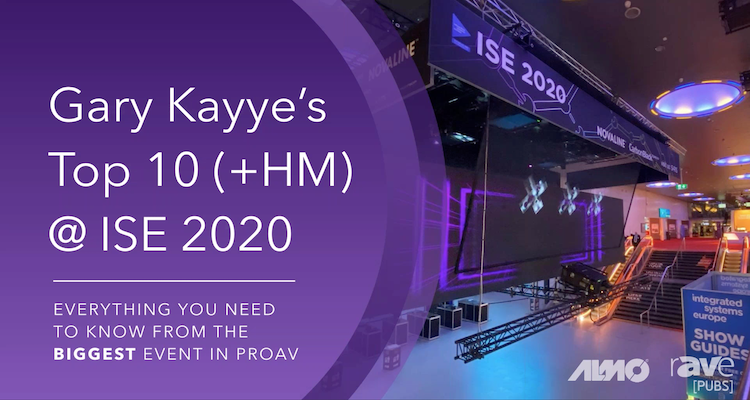 Every year, I like to release a top 10 list of my favorite things that I have seen at Integrated Systems Europe. Last Wednesday, in collaboration with Almo Pro A/V and Barco — I hosted a webinar in which I expanded on just that. But I understand that not everyone can attend every single webinar, […]

READ THIS FIRST: How to Use the rAVe ISE 2020 MicroSite The 2020 version of the ISE (Integrated Systems Europe) Show has come to a close, but our coverage here will live forever here — on this rAVe [NOW] InfoComm 2020 Microsite! We have so much coverage — and there’s so much information on this ISE 2020 microsite that it can be overwhelming. So, please take moment […]